Out now from Cambridge University Press... BUY HERE (Use ZARAKOL22 for 20% off) 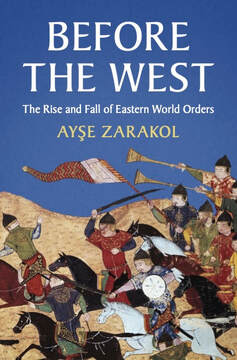 (Scroll down for sample pages, links to book interviews & reviews)

In this imaginative and iconoclastic book, Ayşe Zarakol turns some major received wisdoms of academic international relations on their head. Well before the modern world order was shaped by a rising West, the great empires of the East had formed world orders of their own, equally based on territorial sovereignty and universalistic in their aspirations. Charting the historical trajectories of these orders across five centuries, Zarakol encourages us to revise our standard accounts of the international system and especially those of the rise and decline of world orders. As such this book is an invaluable contribution to the study of international relations in a global context.
Jens Bartelson, Lund University

This ingenious book does for IR what Marshall Hodgson did for world economic history. By avoiding Western teleology, Ayşe Zarakol brilliantly reveals the world of ‘international’ relations that existed before the world of Westphalian Europe, but which has for so long been hidden behind the wall of Eurocentrism. Accordingly, the book provides a compelling example of how historical IR can tell us new things about the fundamentals of world politics.
John M. Hobson FBA, University of Sheffield

“Brilliant” and “original” doesn’t begin to do justice to Zarakol’s book. After reading her reconstitution of the Mongol political order and its influence, you will never look at China, Russia, or the political structure of Asia the same way again. European history too, especially the Habsburg empire, appears in a new light. Zarakol shows how much of world history, and even our modern age, was shaped by the Mongols' pattern of highly centralized, aristocratic sovereignty joined to millennial destiny.  The breadth and ambition of this book is staggering.  A must read for global history.
Jack A. Goldstone, George Mason University

​Zarakol's Before the West successfully challenges Eurocentrism not by running into its opposite, Sinocentrism, but by examining Asia and its interconnectedness to the rest of Eurasia. Against Sinocentric works that treat Mongols as “barbarians,” the author puts the Mongol empire at the center of analysis and underscores the high degree of centralization in the Chinggisid sovereignty model. Zarakol vividly demonstrates how “Asia was first made whole” by Genghis Khan's world conquest. She makes the provocative argument that the supposedly Chinese Ming emperors who overthrew the Mongol Yuan dynasty were in fact “Chinggisid sovereigns,” along with the contemporary Timurids in West Asia. This book is a gem in the genre of Global IR and macro-historical comparison.
Victoria Hui, University of Notre Dame

​In Before the West, Ayse Zarakol provides a brilliant and illuminating macro-history of the rise and fall of Eastern world orders that forcefully challenges the conventional history of international relations. In addition to making a persuasive case to separate the rise and decline of the great powers from the rise and decline of world orders, Ayse Zarakol provides a masterful explanation of the “decline of the East.” This compelling work that blends history and International Relations theory is bound to make you see contemporary issues related to order, rise, and decline in new light.
Manjeet S. Pardesi, Victoria University of Wellington

Before the West constitutes a tour de force. Ayşe Zarakol brilliantly reorients the Eurocentric focus in international relations scholarship by studying relations between Asian actors in their own right rather than as derivative of European-Asian interaction. She creatively highlights the influence of the Chinggisid conceptualizations of sovereignty and world order. In so doing Zarakol demonstrates that we need to focus on the intersubjective understanding of the world order in which those powers are embedded rather than merely understand the rise and decline of great powers in material terms.
Hendrik Spruyt, Northwestern University